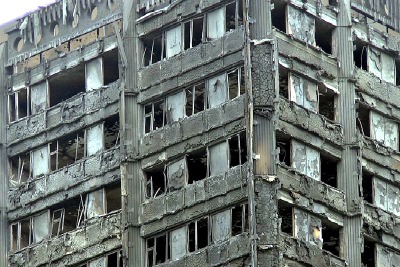 The Grenfell Tower blaze in London tragically took the lives of almost a hundred people, and left many more without homes. As it becomes increasingly clear that this catastrophe is, at least in part, a consequence of years of austerity politics, Kevin Hargaden reflects on how it illuminates the problems with housing in Ireland.

The need to speak clearly

There are tragedies whose aftermath demands only silence. Writing of the 2006 Indian Ocean tsunami, the Orthodox theologian David Bentley Hart reflected that considering “the agonies and sorrows it had visited on so many, we should probably have all remained silent for a while.” In such circumstances, “pious platitudes and words of comfort seem not only futile and banal, but almost blasphemous.”

There are tragedies where the searching for meaning or the investigation of causes is almost offensive. The Grenfell Tower inferno is not that kind of tragedy.

Considering the deliberate and concerted commitment to unweave the social fabric exposed in that rapidly engulfed building, a refusal to speak borders on the blasphemous.

The Grenfell Tower inferno is not a natural tragedy, but an unnatural one. It was predicted by those best placed to know the risks. It was made possible, likely, perhaps even inevitable, by years of governmental neglect. Even speaking of neglect is misleading, because it indicates a sort of carelessness. The British government was paying careful attention, but to the markets and to cutting expenditures by “streamlining” services and creating a “bonfire” of red tape. The politics of austerity cares for some people and is careless about others. It is this unnatural imbalance, in the richest part of England, that means some people get refunded their council tax, and other people die needlessly.

The Christian observing this needs to go beyond sympathising with those bereaved and offering charity to those left behind. Grenfell Tower is another node on an emerging chart that reveals the world we live in. It exposes in the UK what Hurricane Katrina revealed in the USA. That too was no natural disaster, but one that was predicted by those paying attention. As the theologian Scott Prather has compellingly argued, the politics that made the tragedy of Katrina possible is one that “seeks to profit off others’ tragedy, privatize at every turn and thereby redirect political power and socio-economic resources for the material wealth of the few.”

The need to hear that speech at home

Compounding the tragedy in Britain has been vocal voices (thankfully a minority) that have protested the re-housing of the victims of the blaze in some of the very expensive apartment developments in Kensington. The call by Jeremy Corbyn to appropriate empty houses in the area for the care of those rendered homeless incited a strong negative reaction from some. But as it appeared the council planned to relocate some residents as far north as Preston (227 miles from London), it was clear that there is a strand within the British government that values property rights higher than human rights.

Of course, we would be deluded if we thought that what happened in London could not happen in Ireland. We have already seen how “self-certified” safety standards can result in buildings unfit for habitation. Even this year, we have also seen our own tragedies around homes swallowed in fire. It is important that people in Britain pay heed to the political decisions that made the Grenfell Tower blaze possible, but it should also prompt Irish people to reflect on how we, as a society, have agreed to organise housing.

When a fire at a halting site in Carrickmines resulted in ten fatalities in 2015, local residents actually blockaded the area to stop building equipment from providing emergency housing on a nearby vacant plot. In the context of a homelessness crisis that continues to accelerate, when a former B&B in Clontarf was purchased to provide emergency accommodation for families without a place to live, local protests ensued.

What unites property owners in Kensington, Carrickmines, and Clontarf is prosperity. These are aspirational locations, neighbourhoods that come with a premium price. Everyone upset in Kensington about re-housing policies begins by expressing their horror at the Grenfell tragedy. Those protesting in Carrickmines granted that “you’d have to be sad for them” but those left behind after the blaze were “not wanted here”. The residents in Clontarf were keen to express their “sincere sympathy” for those who are without homes, but they still opposed the development. When reading language couched like this, one is reminded of the skilled lawyer who famously asked Jesus, “But who is my neighbour?”

The need for speech to become action

Jesus’ answer was to tell the parable of the Good Samaritan. “Go and do likewise,” he teaches, after recounting the story of how mercy so often comes from unexpected places. The Grenfell Tower blaze was not a natural disaster, but a political one. In Scott Prather’s theological examination of the aftermath of Katrina, he argues strongly that our planning systems are established to ensure that people at the top are protected from such tragedies. This is why it is insufficient to wash our hands by speaking in resigned tones of regulatory neglect. The arrangement that means that the cheapest materials go to public housing and the fire-services are stripped to the bone is not unintentional. It is with deliberate and considered care that means these decisions are perpetually made. We care more about satisfying the markets than protecting people. The human cost in lives lost and homes ruined was the inevitable consequence of the British political commitment to austerity.

And it is on this level that the tragedy of Grenfell Tower comes home to us in Ireland. As Dublin races into yet another bubble, our collective belief that property is a commodity is reflected across our government policy. We have largely stopped building public housing (Ruth Coppinger reports that only 253 units were completed last year). We provide social housing through structures that subsidise private landlords. We respond to homelessness with makeshift solutions. We allow international vulture funds to exacerbate the rental crisis. We can look on in disbelief as those with much resent the basic charity being offered to those left with nothing after the Grenfell blaze, but the Irish housing system is riven by systemic inequalities that leave it as fragile. We do not have a track record of hospitality to those who find themselves without a place to lay their head.

Hospitality is the heart of the Gospel. From Abraham welcoming the three strangers in Genesis 18, right through to Mary’s famous “thy will be done”, the entire narrative arc of the Bible rests on the everyday responsibility to care for whoever it is that God puts in our path. In Ireland, our politics of housing does the exact opposite. It leaves individuals to fend for themselves. It rewards and strengthens those who are already strong and rewarded. It takes an essential of human life – that we would all have a home – and leaves it to the vagaries of the market.

As we reflect on Grenfell Tower, praying for those who are bereaved and supporting those who are left behind, we should also consider how we can care for the slow-motion tragedy afflicting our neighbours closer to home. Re-weaving the social fabric is the task set before us. Agitating for a return to providing high-quality social housing and enshrining housing as a human right would be two constructive steps we could take to avoid sounding like that skilled lawyer, pretending not to know who his neighbour was.