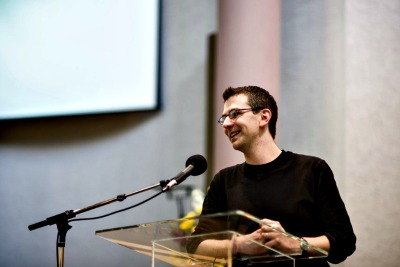 Writing in The Irish Times Online Kevin Hargaden, Social Theology Officer in the Centre questions the fuss that is being made over Stephen Fry’s comments on blasphemy.

Kevin argues that the fiasco has exposed the cultural gap between the concerns of real, actual religious people and the conversation about religion in Ireland.

The following are three short extracts from Kevin’s piece; you can read his article and join in on the conversation on The Irish Times website

In February 2015, in an interview with Gay Byrne on the RTÉ show The Meaning of Life, the British comedian Stephen Fry engaged on a range of questions before famously addressing the knotty theological problem of theodicy. Theodicy is the word used for conversations about why a good God would permit evil.

Fry’s answer to Byrne’s question about what he would say to the God he does not believe in, may not have been as profound, but was as fluent as one would expect. Beginning by asking: “Bone cancer in children? What’s that about?”, Fry went on to describe the deep suffering that is so commonly experienced in this world.

If we were following the discourse in the media, Irish Christians would appear to be preoccupied with embroiling a gameshow host in a court case and insisting on TDs standing for prayer regardless of what they believe in. Yet in fact, their political and social concerns are much more closely informed by their Scriptures and their tradition, and therefore actually committed to environmental justice, economic fairness, prison reform and housing provision. There is no theological warrant for a blasphemy law and no religious desire for one.