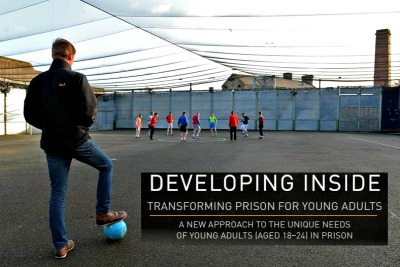 The Centre has called on the Government to end ‘severe confinement’ for young adults in prison. Out of fear for their own safety, 100+ young adults (aged 18–24) are spending up to 23 hours a day in their cell.

Our latest report, Developing Inside: Transforming Prison for Young Adults recommends that Youth Justice, under the Department of Children and Youth Affairs be assigned responsibility for 18–24 year olds in prison.

Click here to read: Developing on the Inside:Transforming Prison for Young Adults

‘Time to end severe confinement of young adults in prison’

Jesuit Centre for Faith and Justice launches report into young adults in prison.

The Jesuit Centre for Faith and Justice Today (Tuesday, 31st May 2016) called on the Government to end ‘severe confinement’ for young adults in prison. Out of fear for their own safety, 100+ young adults (aged 18–24) are spending up to 23 hours a day in their cell, according to Eoin Carroll, Advocacy Officer for the Centre, speaking at the launch of the Jesuit Centre’s report, Developing Inside: Transforming Prison for Young Adults.

The Centre recommends that the Minister for Children and Youth Affairs, Katherine Zappone TD, be assigned responsibility for 18–24 year olds in the criminal justice system, and that the number of young adults in prison should be halved and accommodated separately to older prisoners.

“It is shocking to learn that people in prison, my age, spend so much time locked in their cell. That the norm is around 17 hours locked up each day and that there are over 100 young adults locked up for longer, some for 23 hours.”

Fr Peter McVerry, who visits Mountjoy and Wheatfield prisons each week, speaking at the launch said,

“Far too many young people in prison spend almost all their time in prison locked up in their cells, out of fear for their own safety. The issue of safety, both for prisoners and staff, is a major concern. The conflicts and issues around drugs which exist within the community continue when a person is imprisoned. Promoting an environment where both prisoners and staff feel safe is not an easy task but involves promoting restorative practices and conflict resolution, involving young people in decision making and providing access to a wide range of educational and training services, including access to drug detoxification and treatment.”

Joanne O’Riordan at the launch told the story of her visit to Fort Mitchel Prison,

“As a baby my parents brought me to Fort Mitchel Prison, since closed, on Spike Island in Cork. The prisoners there – mainly in their early 20’s – decided to organise a fundraiser for my family. When my parents heard, they wanted to personally thank them. I spent a day playing with them in the prison. Such a gesture, prisoners raising money for someone, really challenges our perception about people in prison as being just “bad””.

Peter McVerry went on to say,

“Imprisonment is inherently a negative experience. Learning from the decisions we make is a key dimension to a young person’s development. However, in prison all decisions are made for you by the prison authorities. If we are going to lock young people up, involving young people, as far as possible, in the decisions that affect their life in prison should be a priority. Most young people in prison have left school early, have no qualifications or skills, often poor literacy skills, no history of employment. Indeed they have been failed by all the systems in society. It should be a priority to ensure that their time in prison is used constructively, by equipping them for life outside prison through educational and skills training. Unfortunately, for many young people, they leave prison no more equipped for life than the day they entered prison.”

Eoin Carroll, Advocacy Officer in the Jesuit Centre, outlining findings and recommendations from the report saying:

“What our report highlights as being particularly startling is the percentage of young adults on ‘extended lock up’ what we refer to as ‘severe confinement’. Thirty-one percent of adults on extended lock up times are aged 18–24. The most recent figures we have showed that seventeen young adults were locked in their cell for 23 hours each and every day. This is hard to fathom, over the course of a week that is 161 hours out of 168 locked up.”

“The evidence is there as to why young adults end up in prison. At a structural level: poverty, deprivation, social exclusion, an inadequate supply of housing and exclusion from school. We also know that young adults are risk takers, impulsive and do not fully understand the consequences of their action. In fact, they are more similar to children then older adults. Logically then – as is the practice in many other countries – young adults in the criminal justice system should come under the remit of the Minister for Children and Youth Affairs, Katherine Zappone.”

“Behaviourally, all young adults push boundaries and challenge authority; within the prison system this has resulted in a disproportionate number of 18–24 year olds being placed on the ‘basic’ accommodation level. What this means is that they have less access to family visits and telephone calls. 9 per cent of young adults in prison compared to 2.6 per cent of all adults are on ‘basic’ level meaning they have only one half hour visit per week. This is contrary to the necessity of keeping young adults in contact with family and community.”

The Jesuit Centre’s report, Developing Inside: Transforming Prison for Young Adults, is available at www.jcfj.ie

Joanne O’Riordan is a campaigner and activist on a number of issues, including disability rights, and is currently studying for a degree in criminology in University College Cork. When Joanne was a baby she visited Fort Mitchel Prison on Spike Island (Cork) after the young adults imprisoned there organised a fundraiser for her.

Peter McVerry SJ is a social justice advocate with a particular focus on homelessness. Peter is a visiting prison chaplain and member of the Jesuit Centre team.

Eoin Carroll is Advocacy Officer with the Jesuit Centre. Eoin co-ordinated the production of the report. His background is in social policy analysis.

[Statistics from the Report – original graphs and stats available]

Young adults are overrepresented in prison

Representing 12 per cent of the adult population nationally, 18–24 year olds make up 24 per cent of all those sent to prison each year (most recent year available 2014).

If Ireland followed the imprisonment rate of young adults in Finland we would have less than 350 in prison.

Referred to by the Jesuit Centre as ‘severe confinement’
Thirty-one percent of adults on extended lock up times are aged 18–24 (January 2016; Irish Prison Service (2016a)).

Accommodation within the Irish prison system differs from prison to prison and also within each prison. Within each prison operates three levels of accommodation, basic, standard and enhanced. A young adult enters prison at the ‘standard’ level, depending upon their behaviour they will move up or down a level or stay static.