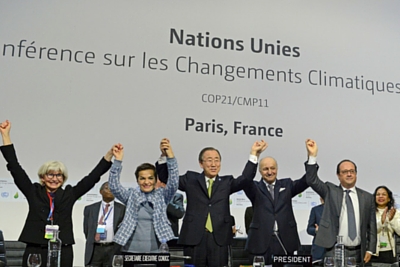 This Earth Day, Friday 22nd April, world leaders gather to sign the Paris Agreement. Although the Agreement reflects political consensus on tackling climate change, action is urgently required to help translate ambition into reality. Catherine Devitt, environmental justice officer with the Jesuit Centre for Faith and Justice argues that we need to move beyond a narrow framing of environmental problems, to embrace a more holistic perspective which helps transform how we view our relationships with each other and the environment.

This Friday, April 22nd, marks the celebration of Earth Day, the annual event which brings together millions of people from around the globe to express support for environmental protection. Earth Day 2016 marks the 46th anniversary of the first Earth Day which is often credited as playing a fundamental role in launching the modern environmental movement. More recently, the concept has been expanded to become Mother Earth Day, based on the simple yet profound recognition of the interconnectedness between all species on Earth and with the Earth itself, and the need for humanity to live in greater harmony with the natural environment.

On the same day, world leaders will gather in New York to sign the Paris Agreement – the framework put forward by the United Nations Framework Convention on Climate Change for dealing with climate change mitigation and adaptation. Our review of the Agreement can be read here. Although the Paris Agreement reflects international political consensus on the need to tackle climate change and is ambitious in its aims to limit temperature rise to 1.5 degrees C above pre-industrial levels, strong political and public will is urgently required to translate this ambition into reality. Challenging decisions lay ahead, especially when we consider the growing body of scientific evidence which points clearly to a quickly diminishing window of opportunity in which to prevent dangerous climate change levels.

Yet, so far, the gravity of the crisis fails to capture public and political imagination; a key issue Pope Francis identifies in his encyclical, Laudato Si’.

To illustrate for example: while there existed political support for the Paris Agreement here in Ireland, a slow and weak response to date on making the transition to a low carbon society means that Ireland is currently on track to becoming the highest emitter of greenhouse gas emissions in Europe. Although increases in emissions from sectors such as aviation, construction, and power generation over the past year in Ireland may signal economic recovery, we are clearly at the stage where we need to decouple economic growth from emissions growth. We need to recognise that economies are components of, and depend upon the Earth’s ecosystems to function. Indeed, real poverty alleviation and societal development, which should exist at the core of a recovering economy, requires the wider acknowledgement of nature’s role in contributing to our societal well-being, health and security.

Our failure to act now on climate change means that the transition towards a decarbonised society will become increasingly more difficult, to the point where any efforts we take in the future may risk accentuating further ecological harm while amplifying existing social injustices.

Can this collective failure to truly respond be explained by how we are approaching the problem? We cannot build our way out of climate change. Yet, efforts such as carbon trading, carbon capture, and climate smart agriculture reflect the predominance of the same technocratic and anthropocentric paradigm – of which climate change is a symptom – which has divorced us from the natural environment in the first instance.

“To seek only a technical remedy to each environmental problem which comes up is to separate what is in reality interconnected and to mask the true and deepest problems of the global system” (Laudato Si’, Para. 111)

Furthermore, what about the wider environmental degradation which drives species extinction and ecosystem decline, and which is also anthropocentric-driven? While the Paris Agreement offers the basis of a roadmap for tackling climate change, similar ambition and progress on protecting biodiversity is significantly lacking.

A challenging question that presents itself every day for me is: how can we respond to the many environmental (or rather, socio-ecological) crises that we face, including climate change, in a manner that is ecologically and socially just? How can we truly address the core and cause of the problem in a way that is meaningful, fair and long-lasting? How can we shift from an ego-centric way of thinking to what systems theorist Fritjof Capra describes as a perspective informed by “connectedness, relationships, patterns and context”?

The theme of this year’s Earth Day is Trees. This old oak tree stands firm in a small village in co. Wicklow. Photo-credit ©: C. Devitt

In comparison to last year’s Earth Day, this year we have the guidance, motivation and legitimacy generated by the publication of Laudato Si’. For Christians, the encyclical presents a moral obligation to proactively exercise a care for the natural environment. Laudato Si’, however, speaks to a much wider universal audience, and it is here that its potential value can be revealed. Pope Francis also embraces the notion of Mother Earth by drawing on St. Francis of Assisi in the opening sections of Laudato Si’, to remind us that our Earth is like “a beautiful mother who opens her arms to embrace us…”.

Understanding Earth as Mother allows us to view the planet – to view our local ecosystem – as the giver of Life, the giver of unrelenting Love; thus, exploiting the natural environment in a way that is harmful means turning our back on the very Love that we depend on for our own nourishment and sense of fulfilment. In the words of Pope Francis, “we have forgotten that we ourselves are dust of the earth; our very bodies are made up of her elements, we breathe her air and we receive life and refreshment from her waters”. (Laudato Si’, Para. 2)

As rightly pointed out by Henry Longbottom SJ during last year’s Earth Day, this notion of Mother Earth presents a “more horizontal rather than hierarchical view of the world”, allowing for a recognition of the “complete interconnectedness between ourselves and the non-human natural world”. We are also presented with an opportunity for a new environmental movement to emerge based on the communication of moral and ethical values.

Evidently, in truly celebrating Mother Earth on Friday 22nd , we are invited to place far greater value on “interiority” – the awareness and relationship present within all living beings – and a healthy ecology and society above ecological and socially unsustainable notions of progress. As our political leaders meet in New York this Friday, we are all invited to move beyond the narrow lens of how we define and respond to environmental problems, to embrace a more holistic viewpoint which challenges and helps transform how we currently view our place on Earth, and our relationships with each other.