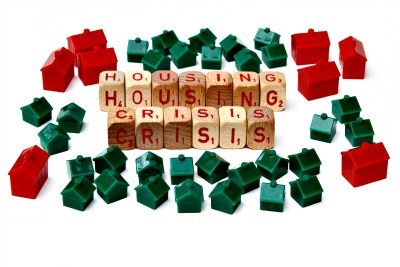 Prior to the election the JCFJ in a joint statement with other social justice groups argued that the current housing crisis has to be solved.The next Government needs to have housing top of their agenda and reverse the failed policy of the last 20 years where there has been an over reliance on the private rented sector to meet social housing needs. The Government needs to make local authorities and not-for-profit bodies the key providers of social housing.

In our pre-election joint call along with the Council for Justice and Peace of the Irish Catholic Bishops’ Conference, the Society of St Vincent de Paul and the Vincentian Partnership for Social Justice we highlighted that:

“Homelessness is just the tip of the housing crisis iceberg: tens of thousands of individuals live in households which are on waiting lists for social housing; many other households face the risk of losing their home as a result of long-term mortgage arrears.”

“The policy of the last twenty years of relying on the private rented sector to meet social housing needs has proven to be a dismal failure; it has contributed to the massive growth in family homelessness in recent years and to the numbers on local authority waiting lists more than doubling since 2005 and tripling since 1993.”

“The next Government should adopt a new social housing policy, one which would make social housing that is owned and managed by local authorities and not-for-profit bodies the primary means of meeting social housing need.”

“The principle that housing is a fundamental human right should guide all housing policies.”

The social justice organisations have called on all candidates and voters in the forthcoming General Election to make housing and homelessness key issues in the campaign.

The groups say: “Despite extensive media coverage and expressions of public concern regarding the housing crisis, the urgency and seriousness of the issue do not seem to be reflected in the public discourse in the run-up to the election.”

“The current housing crisis, in its many different dimensions, is causing immense hardship and stress to great numbers of Irish households. For these families and individuals, ‘recovery’ from the recession is having little meaningful impact on their lives.”

The groups say: “In the context of the forthcoming election, it is important that both politicians and the electorate think about the profoundly damaging impact which the housing and homelessness crisis is having on the lives of so many people, including significant numbers of children, and consider how the mandate given in the election result can enable the next government to accord priority to tackling this most urgent social issue.”

Homelessness among families increased by 90 per cent during 2015

Fr Peter McVerry SJ of the Jesuit Centre for Faith and Justice pointed to the increasing toll of family homelessness: “Between January and October 2015, the number of families in emergency accommodation rose from 401 to 774, an increase of 93 per cent. The number of children living with their parents in such accommodation rose from 865 to 1,638 (90 per cent increase). Almost one-third of all individuals now officially registered as homeless in Ireland are children. This is truly shocking.”

Fr McVerry added: “We know that the vast majority (over 85 per cent) of families who are homeless are in the Dublin region, but we need to pay attention to the fact that during 2015 there was an increase in family homelessness in every region of the country.”

Caroline Fahey, Social Policy Officer with the Society of St Vincent de Paul (SVP), said: “SVP members throughout the country are meeting increasing numbers of people who are in fear of losing their home because of high rents. Often a totally disproportionate share of a household’s income is going towards the cost of housing, leaving very little for other essentials such as food and heating. This situation becomes unsustainable and so the family may lose their home and, finding that there is no affordable alternative, become homeless. Members of SVP are now visiting hundreds of families who are in emergency accommodation in hotels and bed and breakfasts.”

She went on to say: “Living in the confines of emergency accommodation presents severe difficulties for both children and parents. Children often have to travel long distances to school, and have nowhere to play safely or do homework.”

Homelessness is just the tip of the housing crisis iceberg

The four groups point out that while homelessness is obviously the most visible and severe feature of the housing crisis, the reality is that there are tens of thousands of households in Ireland today experiencing some form of housing distress. The most recent national figures for social housing waiting lists, relating to March 2013, revealed that there were then 89,872 households assessed by local authorities as being in need of social housing. This was more than double the figure for 2005 and greater than three times the 1993 figure. It is generally believed that the next national assessment, in March this year, will show an even greater number in housing need.

Sr Bernadette Mac Mahon, Director of the Vincentian Partnership for Social Justice, pointed out: “It is important to remember that the numbers on waiting lists for social housing relate to households and so the number of individuals impacted by the shortage of social housing is obviously much greater and includes many thousands of children.” Sr Bernadette added: “We need to remember also the long duration of waiting for social housing: 60 per cent of the households in housing need in 2013 had been on a waiting list for over two years.”
Fr Peter McVerry said: “Another dimension of the housing crisis is the number of households now in long-term mortgage arrears. While the overall number of mortgages in arrears has fallen in recent years, and this is obviously a welcome development, a significant percentage of arrears are now long-term – that is of over two years’ duration. There were 37,269 such arrears in September 2015, representing 40 per cent of all arrears on mortgages on principal dwelling houses.”

Fr McVerry added that the issue of long-term arrears on buy-to-let mortgages also needs to be noted in considering the housing crisis. He said: “If arrears eventually result in a receiver taking possession of a property, tenancies may be terminated, even when tenants are willing and able to continue to pay rent. People have become homeless as a result of the lack of protection for tenants in situations where buy-to-let properties have gone into receivership.”

The four organisations argue that the policy of relying on subsidising rents in the private rented sector in order to provide social housing is largely to blame for the increase in homelessness and the scale of housing need reflected in local authority waiting lists. They say: “The private rented sector cannot provide the long-term security and affordability that families and individuals relying on social housing need – and deserve.”

Fr Peter McVerry said: “The dependence over the last 20 years on the private rented sector as a source of social housing has proven to be a dismal failure. The sector is not designed to meet social housing needs: the cost of rent in a rising market and insecurity of tenure, which are inherent features of this sector, make it unsuitable as a long-term housing option for people in need of social housing, as well representing an extremely expensive and open-ended commitment on the part of the State.”

The groups say it is a matter of serious concern that the Social Housing Strategy 2020, published in November 2014, envisaged that almost 70 per cent of the promised 110,000 additional units for social housing would be in the private rented sector.

Fr McVerry said: “What this approach means in practice is reflected in what happened in 2015 in regard to the provision of additional social housing units. The report on social housing output for the year, published by the Department of the Environment on 26 January 2016, showed that almost 70 per cent of ‘new’ social housing units in 2015 were from the private rented sector (8,953 units out of a total of 13,000). Of the remaining 4,047 units provided, 2,700 were social housing units which were refurbished having previously been left vacant. Obviously, the bringing back into use of these units is a welcome development, but the reality is that the refurbishment of ‘voids’ is by definition a once-off, and limited, means of increasing supply. What was notably absent in 2015 was any substantial provision of new social housing units by local authorities and voluntary housing bodies.”

“We strongly urge that the government elected by the next Dáil should adopt a policy that will promote and resource the expansion of social housing that is owned and managed by local authorities and not-for-profit bodies as the primary means of meeting social housing need.”

“Within this social housing strategy, specific attention must be given to the question of providing, as soon as possible, adequate, secure and culturally appropriate accommodation for the Traveller Community.”

Housing is a fundamental human right

The groups state that it must never be forgotten that housing is a fundamental human right, one which is recognised in the Universal Declaration of Human Rights, is outlined in UN human rights conventions on specific issues, and is supported in Catholic social teaching.

Bishop McAreavey said: “The importance of the right to housing is brought into sharp focus when we look at the immense damage and human suffering that come with homelessness and inadequate housing, and consider how the denial of this right impacts on so many other rights – the right to adequate nutrition, health, education, employment, and the right to a family life. Indeed, Pope Francis has referred to the right to housing as ‘a sacred right’.”

The four groups point out that Ireland has ratified a range of UN treaties, including the International Covenant on Economic, Social and Cultural Rights and the Convention on the Rights of the Child, whose provisions include the right to housing. They say: “In ratifying these treaties, the State committed itself to doing all in its power to realise the right to housing for everyone in this country. This should be the guiding principle and the driving force behind all policies relating to housing, including the provision of social housing, during the lifetime of the next Dáil.”

The websites of the four organisations: